Here’s an article from Examiner.com. 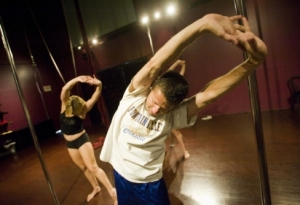 Men’s pole fitness is here, yesterday, today, and even more so tomorrow.

Men on poles aren’t new. Chinese pole dancing, mainly done by men in China and Japan, has long been part of acrobatic acts, done in circus shows. More recently Cirque De Soleil has incorporated a variety of pole acts in there shows. Mainly Chinese pole acts, and swinging poles which are mostly performed by men. Chinese poles are vertical steel poles that are generally between 3 and 9 meters in height and approximately 3 to 4 inches in diameter. They are often covered by rubber to improve grip. Some of the poles are rotating, which allows the performer to spin, while performing. Not an easy task while performing gravity defying moves up in the air. Often times, the men wear special flat thin shoes to help them climb and stay on the poles. This type of pole acrobatics requires extreme upper body and core strength,  and agility, similar to that of an Olympic gymnast, as demonstrated in the videos listed below.

Seeing men on poles doing awe inspiring tricks (ok well some just having fun on the pole) is the wave of the future in the good ole US of A. It will be slow to catch on, compared to Europe, but it is already climbing in our direction. Pole fitness can be an alternative way to lift weights and gain strength, since it requires using ones own body weight to lift oneself up on a pole.

Considering how much strength and agility is needed to perform the largely gymnastics oriented pole tricks similar to what gymnasts do in the Olympics, more men will eventually participate. They already are in the UK, other parts of Europe and in selected studios around  America.  One such studio is this Salt Lake City, studio in Utah (yes, Utah) Studio Soiree. www.utahstories.com/pole_dancing.htm These are every day men who proclaim that pole dancing helps them with rock climbing. Upper body strength certainly lends itself to hanging on to, well, anything really, and definitely helps with endurance.

Not to mention that pole dancing is just pure fun regardless of gender. A shinning example of this is Poledancerfan of youtube. He is a middle aged father, who regularly posts youtube videos of himself attempting and doing different pole tricks, while his wife is upstairs making a pot roast. He often pokes fun at himself, and entertains his audience at the same time as seen by one of his youtube videos pasted below.

Welcome to our blog! We are a group of people with fitness experience with a lot of sass. Regular fitness classes can become boring quick and no one wants to be bored while working out. So here we are! Offering a fun and new way to work out!

You will have fun while you get stronger dancing and moving with a pole. This will build your confidence, strength, flexibility and self-esteem. We offer a blend of creative movement, strength-training, and of course the FUN!

Check out our class schedule and strap those heels on and get ready for a fantastic workout!